On a clear winter night, I sit on my back porch and stare in amazement at the stars overhead; knowing that I can only see but a miniscule amount of the stars in existence. Now imagine that as of 2011 there are “nearly as many bits of information in the digital universe as stars in our physical universe”. (Gantz & Reinsel, 2011, p. 1) The thought that we as a people have created a world where the amount of information we have access to, far outweighs our ability to consume is truly amazing. What are we to do with all this information? How do we process this data? Is exposure to information in massive quantities good or bad for us? What effects does it have on our productivity and our ability to concentrate? These are all questions I hope to answer in the course of this paper. So one might ask just how much data does exist in our digital world. Well, according to the 2011 Digital Universe Study conducted by IDC and sponsored by EMC, there are over 1.8 zettabytes (1.8 trillion gigabytes) of information in existence. This represents a nine fold increase since their first Digital Universe Study in 2006. (Gantz & Reinsel, 2011, p. 1) This is really quite remarkable when you think about the explosive growth of digital information. To put this in perspective, if you stacked 16 gigabyte ipads one on top of another you would have a stack 887,784 miles high. That’s a tremendous amount of data. 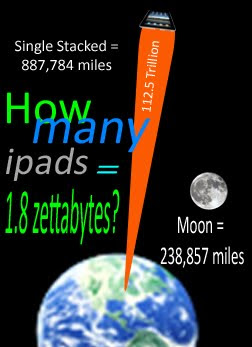 So how exactly have we created so much data? Through my research I found a very interesting info graphic, which you can see below, from a company named DOMO that highlights just how much data is generated every minute. (Tepper, 2012) 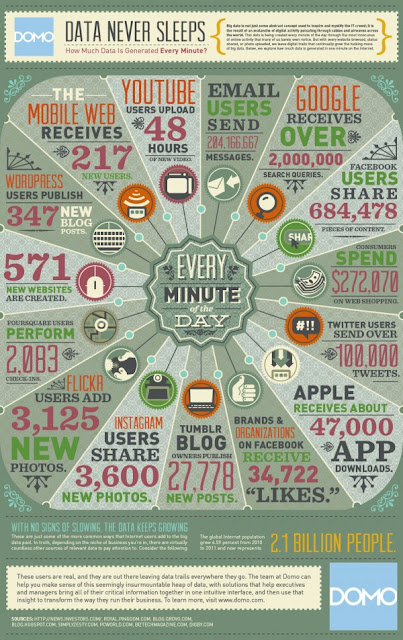 Now that we have a better understanding of how much data exists and where it all comes from we can start to explore what affects the data might have on us. How exactly do we as a people consume this information? How do we use it? Is all this information positive or is it more of a distraction that is effectively dumbing us down? Was Steve Jobs right when he compared computers to bicycles for our brains? (Jobs, 1991); Or is it more likely that MIT Professor Patrick Henry Winston was right when he states that computers are simply making us dumber? (Winston, 2011) Oddly enough, I tend to think both have it right. There is no doubt that the innovation and efficiencies created by technologies have led to advancements beyond our wildest imaginations; yet this same technology can be fraught with potential dangers.

Recently, I decided to track my digital consumption for a period of one day. What I found was surprising. I literally interact with technology from the time I wake up in the morning until I go to sleep at night. I might have a few quiet moments but they are far and few between.

Now had I been asked how I managed to function with so much distraction I would have told them that I was a master multi-tasker. However, after having conducted research for this paper, I am not so sure. As a matter of fact, I am quite confident that I am not an effective multi-tasker at all. I have come to believe that I have to work harder to achieve the same results.

In today’s age, many will tell you that you need to be able to multi-task to be successful. I have even seen multi-tasking listed as a skill on certain job descriptions. I have also heard people boast about their ability to multi-task and how much they can achieve through multi-tasking. Is multi-tasking really possible? The answer to this question is both yes and no. We know it is possible when combining certain visual or audio inputs with physical responses; but is this really multi-tasking or is it merely muscle memorization? As Paul Peace describes in an article for Agency Sales:

“You can drive a stick-shift, which requires the use of two feet to operate three pedals. This is done at the same time one hand shifts gears, and the other hand is on the steering wheel. All of this is in reaction to the visual stimulus from your eyes telling your pre-programmed motor functions which "program" they are to run. Remember, the first time driving a stick-shift wasn't so smooth. And it took many times to get the feel just right so you didn't have to "think" about it. But there is a huge difference between muscle memory developed by repetition in reaction to a single visual or single auditory input stimulus and the brain processing two new pieces of incoming data.” (Peace, 2009)

Peace goes on to describe how performance decreases when you add new stimulus such as talking on a cell phone or reading a text message. I think we all have experienced this when we have caught ourselves drifting into another lane when we glance at our phone or attempt to change the radio station. Another example that those of us with kids are all too familiar with is trying to get your child to pay attention to what you are saying when they are watching television or playing a video game. First they ignore you, then you get the half second glance, and finally they have to push pause to focus on what you are saying; frustrating to say the least. However these are but anecdotal examples; what does science tell us about multi-tasking?

To find out if multi-tasking is a benefit or distraction I reviewed several studies that analyze the brain’s function during multi-tasking. What I found is that multi-tasking actually reduces performance. Take for example a study conducted by researchers at The Center for Integrative and Cognitive Neurosciences at the Vanderbilt University Vision Research Center whose present research results point to “the severe capacity limit of this adaptive coding system in implementing more than one task set at a time, thereby impeding our ability to consciously perceive, and appropriately respond to, successive events in the world.” (Tombua, Asplunda, Duxa, Godwina, Martina, & Maroisa, 2011) What they are basically stating is that the brain is more effective in handling one task at a time and that the brain does not function as well when we input additional tasks at the same time.

A similar study conducted by researchers at Stanford University’s Communication between Humans and Interactive Media (CHIMe) Lab found that indeed the performance of high multi-taskers was reduced in comparison to low multi-taskers. “These results suggest that heavy media multi-taskers are distracted by the multiple streams of media they are consuming, or, alternatively, that those who infrequently multitask are more effective at volitionally allocating their attention in the face of distractions.” (Ophir, Nass, & Wagner, 2009) In an interview to the Stanford News Dr. Clifford Nass, who was involved in this study, suggests “Multi-taskers want to be flooded with information; they tend to want to scan the environment...rather than ponder what they have. We don't know whether there are advantages to that, but so far we haven't found any." (Nass, 2009)

Although science points to the fact that multitasking is less productive than single task completion, the reality is that more and more people find themselves in a world where they feel they need to multi-task just to keep up. This new reality has not gone unnoticed by marketers. As a matter fact major content providers have set up a lab in California to study how people consume information as they strategize ways to break through the bombardment of information. (Waxman, 2006) What they have found is people are indeed doing more than one thing at a time. In an article for the National Post, Sharon Waxman quotes Colleen Fahey Rush, Head of Research for MTV: “Our research showed that people somehow managed to shoehorn 31 hours of activity into a 24-hour day… That's from being able to do two things at once." (Waxman, 2006)

Their research also shows that multi-tasking is not limited based on age; not only are young people doing more and more multitasking, but so are the older generations as they become more and more immersed in technology. In addition they found that the multitasking trends are increasing. “For advertisers, the challenge is getting their message across in one medium while the consumer is active at the same time in several others.” (Waxman, 2006) It comes as no surprise that the marketers as witnessing these trends and searching for new ways to catch the attention of the consumers. What they may find is that with all the choices and information available to the consumers it will become increasingly more difficult to “break through”.

There is no doubt that the deluge of data and information will provide both new opportunities and new obstacles to those who try to harness the power of big data. IBM has begun calling big data a new natural resource. (Deutscher, 2012) The discovery of big data is like the discovery of oil. We know it is something but we have yet to grasp all of its uses. IBM’s info graphic below helps highlight the potential that exists.

The trends show that people are multi-tasking regardless of the decrease in efficiencies. It would seem that doing more things at once creates the illusion of greater productivity even though science proves otherwise. This raises the prospect that instances of multi-tasking are likely to increase as digitization continues to increase and marketers and advertisers find new ways of feeding the public content. What is worrisome, as the researches at Stanford point out is that “many individuals will be increasingly unable to cope with the changing media environment.” (Ophir, Nass, & Wagner, 2009, p. 15885)

From my research it is clear that we are living in a new and rapidly changing world. We will all find ourselves needing to adapt in some form or another. The research is clear that we are less effective when we attempt to multi-task. Hopefully, eventually you will see a greater public awareness of the risks of multitasking. You are already starting to see push back in the form of texting while driving laws and such. Maybe when the newness of such immense information starts to fade, we can adapt to a more focused approach to life and instead of being distracted by the noise, we can peddle into the future as Steve Jobs had imagined.

Interested in seeing how well you multi-task? Try taking the test below and see how you do.